RAW Milk is LOCAL Milk: Clearing Up the Confusion

What is raw milk? Raw milk has not been processed in any way. It has not been pasteurized, homogenized, nor has it had any amount of fats removed.  It comes directly from the cow into a storage tank that cools it quickly, and from there, bottles are filled. We also call raw milk LOCAL milk. More about that later.

What is pasteurized milk? Pasteurized milk has been heated to a certain temperature for a certain period of time to kill bacteria.  There are several levels of pasteurization.  During this process, however, all bacteria is killed – the good and the bad.  Think about taking antibiotics.  It kills all the bacteria, and can sometime leave you with digestive upset.  Not only does pasteurization kill the good bacteria, but it also denatures the proteins, causing some people to have a difficult time digesting it, and destroys certain vitamins and enzymes.

What is homogenized milk? Homogenization breaks down fat molecules in milk so that cream doesn’t separate and rise to the top. Nothing is added to milk during the homogenization process.

Is raw milk safe? Pasteurization was originally instituted in the 1920s to combat TB and other diseases from sick animals and/or unsanitary milking conditions.  In order to sell raw milk in the state of PA, farmers must undergo rigorous inspections of the barn and milking facilities, cattle must be tested for TB and Brucellosis yearly, and the milk tested for various bacterium on a regular basis.  However, with twice daily milkings, even regular testing is just a snapshot of a farmer’s sanitary practices.  It is recommended that people who have immune system issues or women who are pregnant should not consume raw milk, just as they should avoid deli meats, bagged salad greens, sushi, and undercooked meat.  A lot of foods we consume have a risk of contamination, so be wise in your own risk assessment. 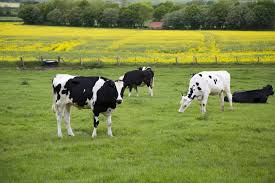 Why choose whole raw milk? Whole raw milk is teaming with vitamins (vitamins A,D, E, and K are only found in fats, which is why skim milk will not have these vitamins), and beneficial bacteria.  Pasteurization actually changes the flavor of the milk through the heating process.  Raw milk tastes sweeter.  No processing means less travelling and handling. Raw milk is local milk, and has a much smaller carbon footprint than grocery store milk.  Raw milk standards are determined by the individual states and not the Federal government.  Milk sales and distribution across state lines is not legal at this time. Buying directly from your local farmer puts more money in the farmer’s pocket.  Keeping money in your community is the best way to support local businesses and keeps the community thriving. There are currently 4 raw milk producers in Wayne County: Fertile Valley, Gross Family Farm, Hardler and Miller’s Farms. Some sell at various farm stands and grocery stores, and others you can buy directly from the farm. For more information, visit the Weston A. Price Foundation and read about their campaign for Real Milk.