Viridian and Clean Currents – Green Generated Energy for your home or business! 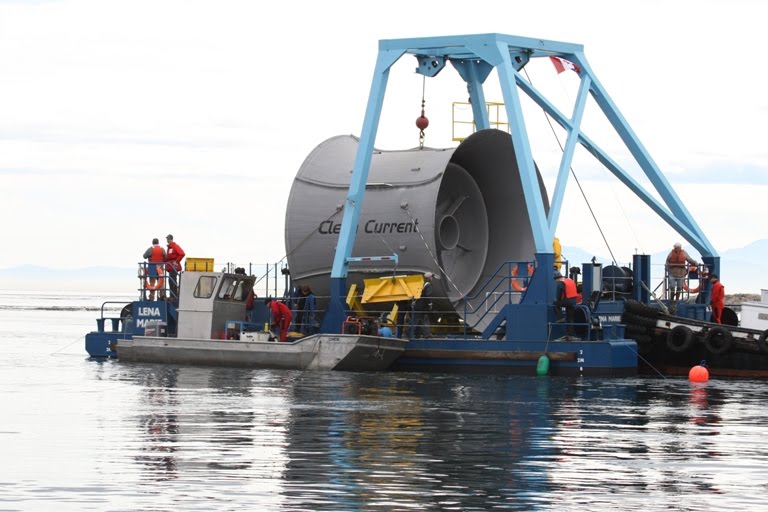 Now we can get Green electricity from the grid and not have to pay extra. At a SEEDS forum in September, 2010 at the Honesdale Conservation District Office, two companies, Viridian and Clean Currents, discussed their programs for delivering green electricity into the grid without a surcharge. The plans are simple but have far reaching results for our future, the carbon in the air, and our pocketbooks. On the left is a picture of a turbine producing tidal energy at Clean Currents.

Both purchase green generated energy, mostly wind at this point, to put into the grid. When we use electricity from the grid, we pay our bill through PPL EU and they pay the generators for what we have used. If we sign up for Clean Currents or Viridian we can choose 20%, 50% or 100% of our energy to be billed green; the larger the percentage, the more green energy these companies buy, and the more goes into the grid with no increase in cost.

Without these companies, when we turn on an appliance, most of the energy comes from “brown” fossil fuel generating plants: over half from coal, some from oil and some natural gas, about 10% nuclear and hydro, and well under 5% solar and wind. Those latter three–wind, solar and water power—are the “green,” renewable sources. If we wanted electricity from green sources put into the grid, we would have to pay a surcharge of around $7.50 a month on top of our regular electric bill. Signing up with one of these new companies means we can get the green energy, without added money, and in most cases, spend less.

With both companies, the sign-up is easy and free. No Social Security number or credit card is needed, only the account number on your PPL EU bill. You’ll still get the same PPL EU bill and get the same emergency service from them. Worse case scenario, if something happens that either company is unable to deliver the green electricity, PPL EU will seamlessly deliver to your house what you need at their going rate. Both Viridian and Clean Currents are licensed by the Commonwealth of Pennsylvania to generate electricity through the grid. This program is currently for PPL EU customers but will most likely extend to Pennelec customers at the beginning of 2011.

The difference between the two companies is that Clean Currents requires a one or two year contract, and Viridian doesn’t. Clean Currents likes to know its annual market to insure a low cost and so goes by contract; if you

sign up with them and change your mind during your contract, you will have to pay a penalty. However your contracted cost is locked in for the period you choose. You are free to change suppliers after your contract is over at no cost.

Viridian is confident that they can buy and sell efficiently on the clean energy market to get the best cost month by month so no contract is needed. If at any time you want to change generators, you just inform PPL EU of your change with no penalty. Their recent and current prices for green energy have been 5% to 10% under PPL EU’s standard price for brown energy.
http://www.viridian.com/

You may wonder why you haven’t heard of these companies before—and yet keep getting mailings from many “brown” generators. First, these are new companies, though they have been operating in Connecticut and several other eastern states for 2 years. Also, instead of advertising through mailings and media, these 2 companies spread the word by giving incentives to non-profit organizations, like SEEDS. Other organizations they work with include the University of Connecticut Athletic Scholarship Program, the Scranton Arch Diocese, EarthAid, Buy Fresh Buy Local LV, and the Green Building Institute. This direct marketing, which is sometimes compared to pyramid schemes, is just another form of advertising. SEEDS has not paid money to either of these companies, but if you mention SEEDS when signing up, SEEDS will receive a contribution from the company you sign with—and thus we’ll not have to bake as many brownies to raise money for our non-profit activities, and saving still more kWhrs and more calories for our waistlines.

I signed up my family for one of these companies this summer—it just took a few minutes and cost nothing. My May bill with the standard PPL generating purchase, showed we were paying 10.133 cents per kWh. On my

September bill I was paying .09857143 cents per kWh—plus putting green energy into the grid. By the way, you may notice all those numbers after the decimal point. That’s how the electric generating companies make their profit, by buying and selling at small fractions of cents per kWh, just like on the stock exchange–the market system.